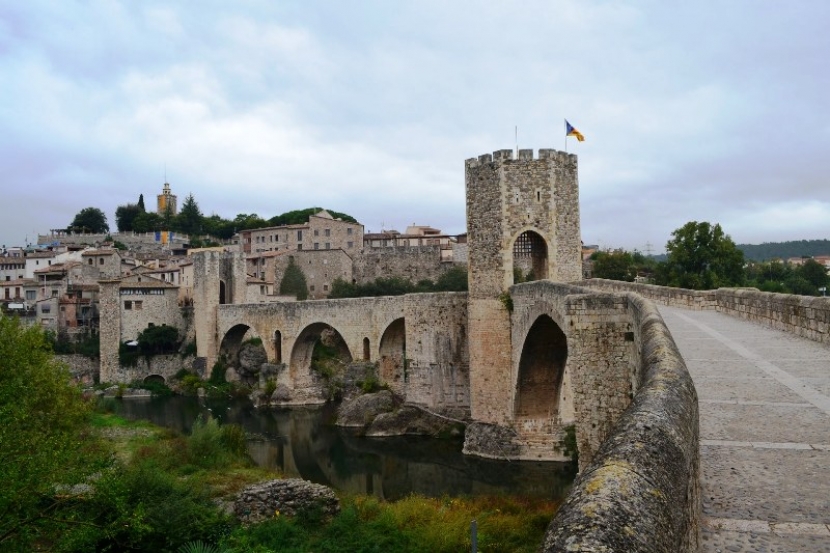 Besalú is a town in Girona, Catalonia. The town's importance was greater in the early Middle Ages, as capital of the county of Besalú, whose territory was roughly the same size as the current comarca of Garrotxa but sometime extended as far as Corbières, Aude, in France. Wilfred the Hairy, credited with the unification of Catalonia, was

Count of Besalú. The town was also the birthplace of Raimon Vidal, a medieval troubadour. Besalú was designated as a historical national property ("conjunt històric-artístic") in 1966. The town's most significant feature is its 12th-century Romanesque bridge over the Fluvià river, which features a gateway at its midpoint. The church of Sant Pere was consecrated in 1003. The town features arcaded streets and squares and also a restored mikveh, a ritual Jewish bath dating from the eleventh or twelfth century, as well as the remains of a medieval synagogue, located in the lower town near the river. Besalú also hosts the Museum of miniatures created by jeweler and art collector Lluís Carreras. Spaniards just voted this small town as one of their country’s most beautiful village in a recent survey in the newspaper El País.

View the embedded image gallery online at:
https://motogpsroutes.com/blog/cities-towns-villages/item/27-besalu#sigProId0876fd1c45
More in this category: « Hawes Angra do Heroísmo »
Login to post comments