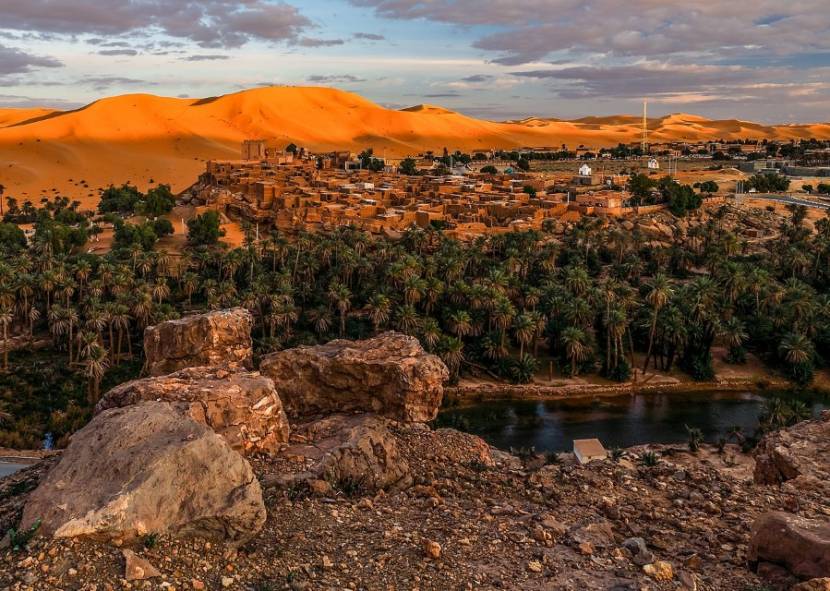 Taghit (Arabic: ﺗﺎﻏﻴﺖ‎) is a town oasis watered by the underground Oued Zousfana, which runs along beside the dunes of the Grand Erg Occidental. The town was the site of the Battle of Taghit in 1903, in which 4000 Zayanes Berbers besieged the French in the town, whom they outnumbered by 10 to 1. The

attackers were later forced to retreat. The Grand Erg Occidental, a large area of continuous sand dunes, lies to the east, while the rocky Djebel Baroun lies to the west across the river. Taghit has a hot desert climate (Köppen climate classification BWh), with extremely hot summers and cool winters, and very little precipitation throughout the year. Agriculture is an important industry in Taghit. Tourism is also significant in Taghit due to many Neolithic rock engravings in the area. Other attractions include sand dunes, palm groves, the old ksar and the zawiya.

View the embedded image gallery online at:
https://motogpsroutes.com/blog/cities-towns-villages/item/5451-taghit#sigProIdf11083b539
More in this category: « Ghadames or Ghadamis Timimoun »
Login to post comments