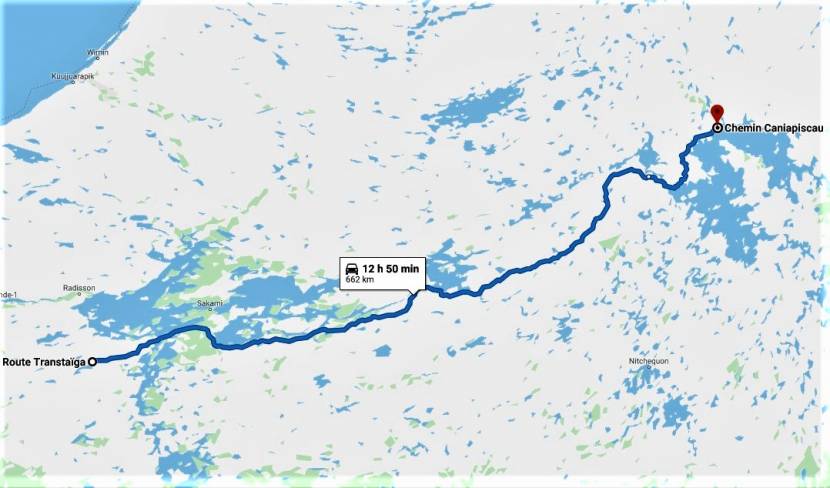 The Trans-Taiga Road (French: Route Transtaïga) is an extremely remote wilderness road in northern Quebec, Canada. It is 582 kilometres (362 mi) long from James Bay Road (French: Route de la Baie James) at kilometer 544 to Centrale Brisay and another 84 kilometres (52 mi) along the Caniapiscau Reservoir, all of it unpaved. The road's northeastern

terminus is almost at the 55th parallel north, making it the northernmost continuous road in Eastern North America. It was built as an access road to the hydro-electric generating stations of Hydro-Québec along the La Grande River and Caniapiscau River. Several outfitters are established along this road, providing wilderness hunting and fishing expeditions, and some may also provide fuel, food and lodging. Otherwise, there are no services along this road. While the Trans-Taiga Road is reportedly drivable by ordinary passenger vehicles for its entire length, Hydro-Québec recommends use of 4WD vehicles for the section between Brisay and Caniapiscau, which is of a rougher grade than the rest of the road. As the name of the road indicates, this road winds its way through Quebec's vast boreal forest, characterized by stunted spruce and pine, bogs and rocky outcroppings. Taiga is the Russian term for the same type of forest.