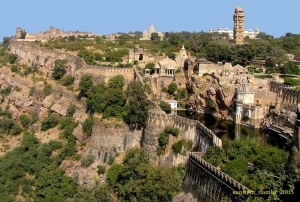 Chittorgarh also Chittor or Chitaurgarh. The city and fort lies on the Berach River, a tributary of the Banas, and is a former capital of the Sisodia Dynasty of Mewar. Fiercely independent, the fort of Chittor, largest fort in India, was under siege thrice and each time they fought bravely and thrice Jauhar (self-immolation) was committed by the ladies and children. Though it is world known for its ruined citadel there is much more to this huge fort. It is a symbol of all that was brave, true and noble in the glorious Rajput tradition. Places of Interest: Chittorgarh Fort, awarded UNESCO World Heritage Site under the name "Hill Forts of Rajasthan", Kalika Mata Temple, Vijay Stambh, Kirti Stambh, Rana Kumbha's Palace, Rani Padmini's Palace.