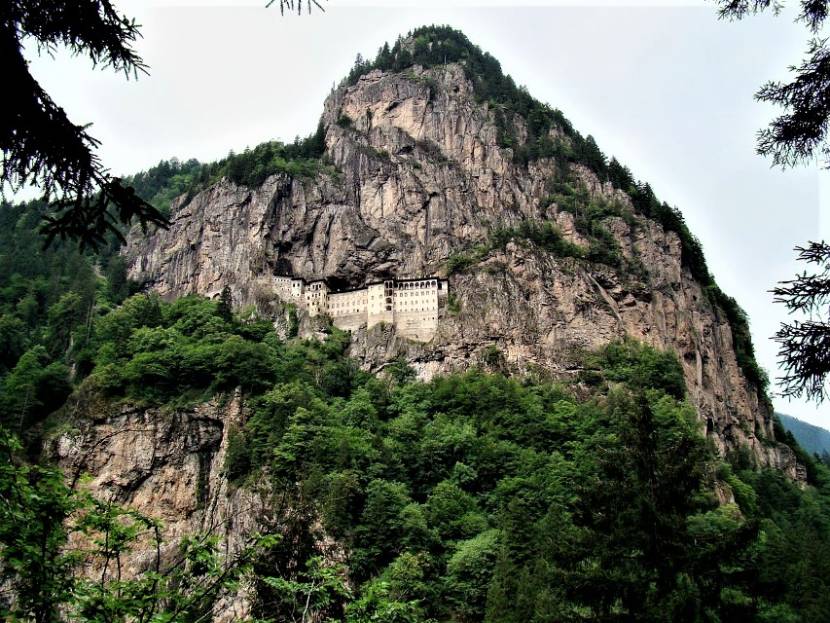 Sumela Monastery or Turkish: Sümela Manastırı, is a Greek Orthodox monastery dedicated to the Virgin Mary. Sou Melá means "Black Mountain". Nestled in a steep cliff at an altitude of about 1,200 metres (3,900 ft) facing the Altındere valley, it is a site of great historical and cultural significance, as well as a major tourist

attraction within Altındere National Park. The Monastery is one of the most important historic and touristic venues in Trabzon. Monastery was founded in AD 386. According to William Miller, Barnabas and Sophronios, two Athenian monks, founded the monastery. It became famous for an icon of the Virgin Mary known as the Panagia Gorgoepekoos, said to have been painted by the Apostle Luke. The monastery was abandoned in 1923, following the forced removal of the Greek population in this region. The departing monks were not allowed to take any property with them, so they buried Sumela's famous icon under the floor of the monastery's St. Barbara chapel. In 1930, a monk secretly returned to Sumela and retrieved the icon, transferring it to the new Panagia Soumela Monastery, on the slopes of Mount Vermion, near the town of Naousa, in Macedonia, Greece. Today the monastery's primary function is as a tourist attraction. It overlooks forests and streams, making it extremely popular for its aesthetic attraction as well as for its cultural and religious significance.