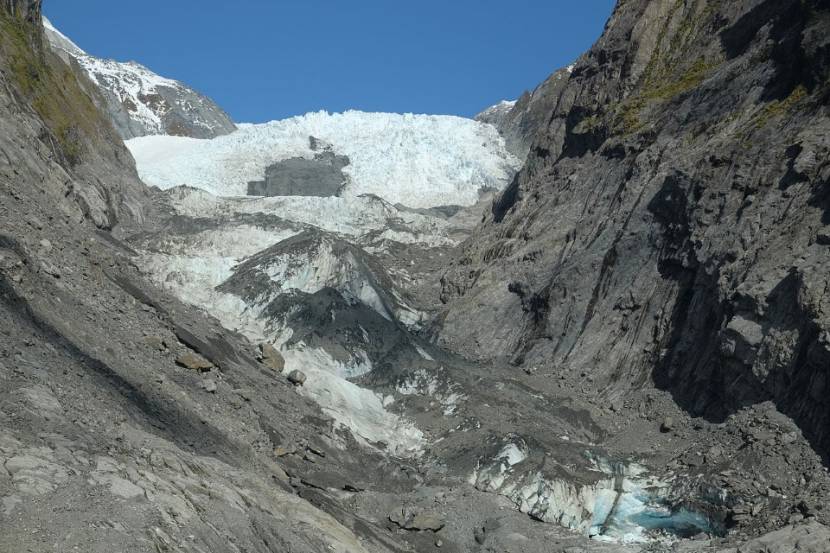 Franz Josef Glacier / Kā Roimata o Hine Hukatere is a 12 km (7.5 mi) long temperate maritime glacier in Westland Tai Poutini National Park. Together with the Fox Glacier 20 km (12 mi) to the south, and a third glacier, it descends from the Southern Alps to less than 300 metres (980 ft) above sea level. The area surrounding the

two glaciers is part of Te Wahipounamu, a World Heritage Site park. The river emerging from the glacier terminal of Franz Josef is known as the Waiho River. The Māori name for the glacier is Kā Roimata o Hine Hukatere ('The tears of Hine Hukatere'). According to oral tradition, Hine Hukatere loved climbing in the mountains and persuaded her lover Wawe to climb with her. Wawe was a less experienced climber than Hine Hukatere but loved to accompany her, until an avalanche swept him from the peaks to his death. Hine Hukatere was broken-hearted and her many, many tears flowed down the mountain. Rangi the Sky Father took pity on her and froze them to form the glacier. The first European description of one of the West Coast glaciers (believed to be Franz Josef) was made in the log of the ship Mary Louisa in 1859. The glacier was later named after Emperor Franz Joseph I of Austria by the German geologist Julius von Haast in 1865. Following the passage of the Ngāi Tahu Claims Settlement Act 1998, the name of the glacier was officially altered to Franz Josef Glacier / Kā Roimata o Hine Hukatere.