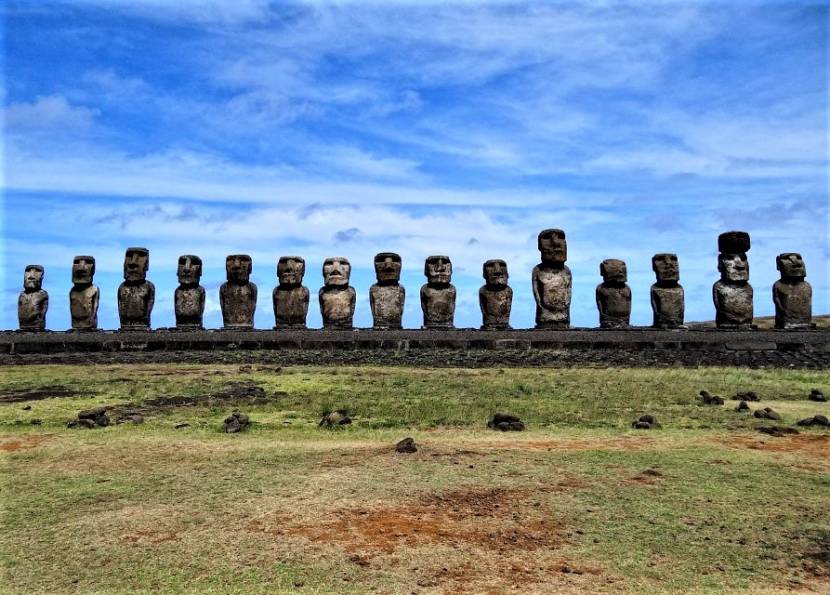 Moai, are monolithic human figures carved by the Rapa Nui people on Easter Island in eastern Polynesia between the years 1250 and 1500. Nearly half are still at Rano Raraku, the main moai quarry, but hundreds were transported from there and set on stone platforms called ahu around the island's perimeter. Almost all

moai have overly large heads three-eighths the size of the whole statue. The moai are chiefly the living faces (aringa ora) of deified ancestors (aringa ora ata tepuna). The statues still gazed inland across their clan lands when Europeans first visited the island in 1722, but all of them had fallen by the latter part of the 19th century. The production and transportation of the more than 900 statues is considered a remarkable creative and physical feat. The tallest moai erected, called Paro, was almost 10 metres (33 ft) high and weighed 82 tonnes (90.4 short tons). The heaviest moai erected was a shorter but squatter moai at Ahu Tongariki, weighing 86 tonnes. One unfinished sculpture, if completed, would have been approximately 21 m (69 ft) tall, with a weight of about 145–165 tons (160–182 metric tons). The moai were toppled in the late 18th and early 19th centuries, possibly as a result of European contact or internecine tribal wars.