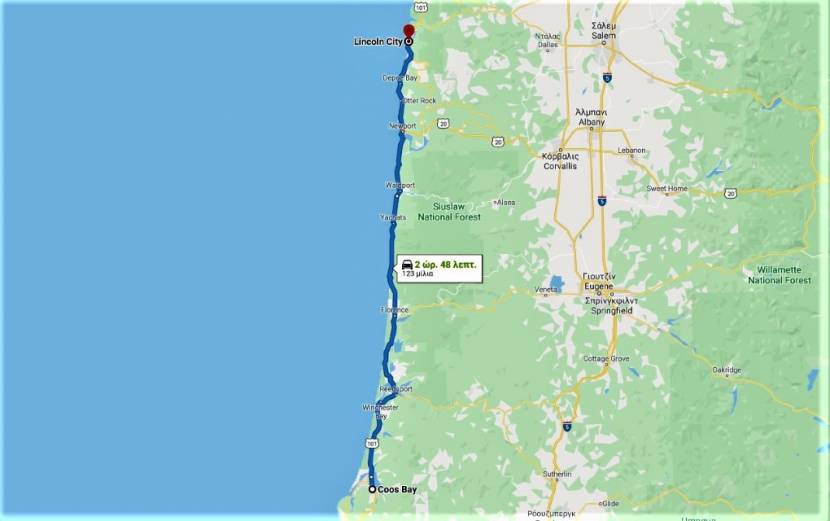 North of Coos Bay, the highway runs along the eastern flank of the Oregon Dunes National Recreation Area, through the communities of North Bend, Hauser, Lakeside, and Winchester Bay before coming into the city of Reedsport on the mouth of the Umpqua River. The highway continues north from there, passing

through the dunes and through the towns of Gardiner, Westlake, Dunes City, and Glenada. The next major town is Florence on the Siuslaw River. The next stretch of US 101 (between Florence and Newport) closely follows the coastline, providing a wide view of the ocean. Towns between these two cities include Yachats, Waldport, and Seal Rock. Eventually, the highway crosses the Yaquina Bay Bridge into Newport. Just before the bridge lies the Oregon Coast Aquarium; on the other side of the bridge is the famed Newport waterfront. Also in Newport, US Route 20 has its western Terminus at US 101. The next stretch of 101, between Newport and Lincoln City, is rather mountainous, as the Coast Range protrudes into the ocean. Cities on the route include Depoe Bay, Otter Rock (accessible via a side road), and the Gleneden Beach/Salishan area, famed for its resorts. Near Siletz Bay is the abandoned community of Kernville, followed by Lincoln City.

More in this category: « 101 / Brookings To Coos Bay 101 / Lincoln City To Astoria »
Login to post comments